Bolivia has lowered its retirement age to 58, breaking with the global trend of pushing people to stay in the workforce longer.

The law, which also nationalises the national pension system and extends coverage considerably to the poor, was passed on Friday.

Bolivia’s current retirement age is 65 for men and 60 for women.

“We are fulfilling a promise with the Bolivian people. We are creating a pension system that includes everyone,” President Evo Morales said at the signing ceremony, surrounded by members of the powerful Bolivian workers’ federation, which helped to draft the law.

The law, which takes effect in a year, also extends pensions to the three million people – 60 per cent of the working population – who labour in the informal economy as everything from street vendors to bus drivers to peasant farmers.

“This is enormously important, possibly one of the greatest advances for lower- and middle-income people in South America in the last 15 years,” Mark Weisbrot, co-director of the Center for Economic and Policy Research in Washington, said.

Critics say the new law is overly ambitious and unsustainable, and could breed financial disaster.

Jacob Funk Kierkegaard, an economist at the Peterson Institute in Washington, says he knows of no other country lowering its retirement age at a time when higher life expectancy is burdening national budgets with pension obligations.

“I would say that they are setting themselves up for a train wreck down the road,” he said in a telephone interview. “That they should be wilfully going down this road strikes me as very, very shortsighted.”

Other countries are moving in the opposition direction. France has led the charge to raise the minimum retirement age in Europe, increasing it last month to 62, with full benefits not available until age 67. Closer to Bolivia, Cuba has raised its retirement ages from 60 to 65 for men, and from 55 to 60 for women.

Bolivia’s deputy pensions minister, Mario Guillen, says his nation should not be compared to the rest of the world.

“A lot of Bolivian workers perform jobs that are eminently physical, not intellectual, and this means that at age 55 they don’t have the ability anymore to keep working,” he told The Associated Press press agency. “Yet we made them continue.”

Bolivia’s average life expectancy is 68 years for women and 63 years for men, according to the UN Department of Economic and Social Affairs’ Population Division. The division puts the global average at 68 for both sexes, with western Europe at 80 and Latin America at 73.

In addition, Guillen said, the conditions spurring European governments to raise retirement ages, more elderly people and falling birth rates, don’t exist in this country of 10 million where per capita annual gross national income was $1,620 in 2008.

Lowering the retirement age had long been a priority for the labour federation, a strong backer of Morales.

Thirteen years ago, Bolivia privatised pension funds after a state-run system collapsed under a cloud of mismanagement and theft.

Since then, Bolivia’s two private pension funds, covering 1.2 million private and public sector workers, have been run by Zurich Financial Services and the BBVA bank. Together, they manage $4.5 billion.

The reform doesn’t specify when the funds will be handed over, but Luis Acre, the finance minister, said the government is talking with companies to step down in the coming year. 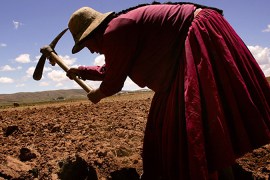 A look at Evo Morales’ struggle to reconcile environmental goals with economic development. 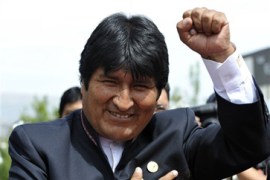