Tom DeLay, the former Republican majority leader in the US House of Representatives, has been found guilty of money laundering.

DeLay was convicted by a Texas jury on Wednesday on charges of illegally funnelling corporate money to Republican party election candidates in 2002.

Prosecutors said DeLay, who once held the Number 2 job in the lower house of congress and whose heavy-handed style earned him the nickname “the Hammer,” used his political action committee to channel $190,000 in corporate donations into Texas legislative races through a money swap.

Speaking to reporters after the trial, DeLay said he was disappointed that the jury had found him guilty. He said the verdicts were a “miscarriage” of justice and he vowed to carry on.

During the three-week trial, prosecutors presented more than 30 witnesses and volumes of emails and other documents as evidence.

Prosecutors claim the money helped Republicans take control of the Texas House. That enabled the Republican majority to push through a DeLay-engineered congressional redistricting plan that sent more Texas Republicans to Congress in 2004, and strengthened DeLay’s political power.

Except for a 2009 appearance on ABC’s hit television show “Dancing With the Stars,” DeLay has been out of the spotlight since resigning from Congress in 2006. He now runs a consulting firm. 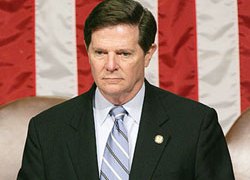 Mired in a political scandal, Tom DeLay, the US House of Representatives’ former majority leader, has said he will quit the US Congress by mid-June.