The Irish government has presented a four-year austerity plan outlining $20bn in savings, a key step towards securing aid from the European Union and the International Monetary Fund.

“I am hopeful for the future that this plan is another confidence-boosting measure for national recovery, another signpost along the road to recovery,” Brian Cowen, the prime minister, told a news conference Wednesday as he presented the plan.

The plan includes thousands of public sector job cuts, phased-in increases in Ireland’s value-added tax (VAT) rate from 2014 from the current level of 21 per cent and social welfare savings of $3.74bn, also by 2014.

But it exempts the country’s 12.5 per cent corporate tax rate, a key attraction for foreign companies that invest in Ireland.

The minimum wage is to be cut, social welfare spending slashed, the number of public employees reduced, while a new property tax and higher income taxes will be instituted. Those changes alone will yield $830m for the government as it seeks to save $20.1 billion by 2014.

“The size of the crisis means that no one will be sheltered from the contribution that has to be made towards national recovery,” Cowen said.

Al Jazeera’s Rory Challands, reporting from Dublin, said that Cowen has been trying to put a positive spin on the austerity measures.

“He has repeatedly said it is in the public interest, amid growing unpopularity over these measures,” he said.

Cowen previously said that the bailout requested from the EU and IMF could amount to $115bn, but some analysts say that figure is too small to save the country from eventual default.

He also said that the bailout package would represent an overdraft or credit line, not the total required immediately for the country, and was still subject to detailed negotiations with IMF and European Commission experts who descended last week on the capital Dublin.

Ireland will be the second country in the 16-nation euro zone to be rescued this year, after Greece.

But Marc Coleman of the National Forum Think Tank told Al Jazeera that the measures would not impact greatly on Ireland’s economic problems.

“These measure will not assist in the continued struggles many Irish people are facing. An attempt to maintain foreign investment in Ireland will not help domestically,” he said.

Francois Baroin, the French budget minister and government spokesman, said that Nicolas Sarkozy, the French president, would discuss the bailout with Angela Merkel, the German Chancellor, on Thursday.

Merkel has said Germany is prepared to help Ireland but the support of the euro zone’s biggest player is conditional on “making clear what steps a country must take to get back on a path of stabilisation”.

Local media however, has reported that the situation was so critical that Dublin could pump extra cash into the ailing banks as early as this weekend, well before the first European and IMF funds are set to arrive.

“Hopefully it can be concluded around the end of November – I cannot be more precise than
that,” a spokesman told reporters in Brussels.

Once a loan agreement is signed, it has to be approved by European finance ministers and the IMF board before the first funds can flow, and disbursements are likely to be linked to benchmarks such as the adoption of the 2011 budget.

The sudden implosion of Ireland’s economy has bewildered local residents.

Unemployment has increased from about four per cent to about 14 per cent in just a few years.

The middle class, working class, young and old have been making their ways to the welfare office, many for the first time.

Anne Fullham, a property lawyer who lost her job in March, sais she never dreamed she would find herself taking government benefits.

“When I was growing up … it was the safest job you could possibly have – if you’re a doctor, a lawyer, an architect. And now the architects and the lawyers are in trouble,” she told Reuters news agency.

“We still all laugh about it in such a way that if you didn’t, you would cry.” 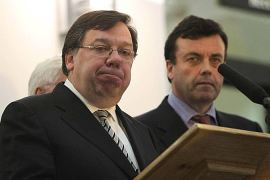 Prime minister to seek early dissolution of parliament in new year after country’s emergency budget has been passed. 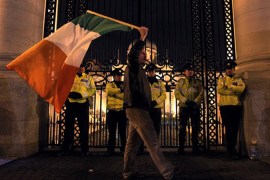 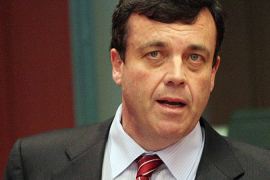 Finance minister to recommend request for financial assistance from EU and IMF at emergency cabinet meeting in Dublin.