Federer looked unstoppable on the court at London’s O2 Arena on Tuesday, losing only eight points on his serve in the match – three in the first set and five in the second.

In bagging his second easy win, the 29-year-old former world number one, bidding for a record-equalling fifth title at the season-ending event, has still not advanced to the semi-finals from Group B.

Robin Soderling beat David Ferrer 7-5, 7-5 in the other Group B match, meaning all players still have a chance to advance.

Murray will face Ferrer in his final match on Thursday while Soderling takes on Federer.

Besides controlling play with his serve, winning 88 percent of the points when he landed his first serve, Federer also forced Murray into long rallies when he was receiving. Pulling forehands to his left and hitting them to his right with ease, the 16-time Grand Slam champion waited for his British opponent to make the errors or set up his winners.

“I don’t think Andy played his best match for sure,” Federer told reporters after improving his career record against Murray to six wins in 14 meetings.

In front of a 17,000 strong home crowd, Murray unravelled.

The world number five was lucky to escape from his opening service game and was forced to save a break point. And it was his serve that was letting him down most of the way, landing only 44 percent of the first serves, allowing Federer to take advantage of the much slower second serve.

“Against him, that’s not going to win you the match.”

Murray was broken to love two games later – prompting a change of shirt colour from white to black.

Only when Murray reached 0-30 as Federer served at 5-4 did he have a chance, but that chink of light was snuffed out as the Swiss reeled off three points with a nonchalant smash, a forehand winner and crunching volley before Murray shanked a forehand wide on set point.

Federer then blazed 4-0 ahead in the second set as he demonstrated just why he has 16 titles and Murray is still chasing his first. He was simply unstoppable.

Nadal will take on Djokovic on Wednesday, while Roddick and Berdych play in the early Group A match. 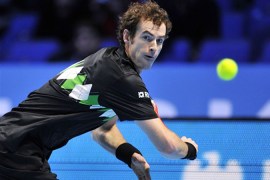 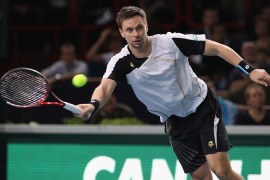 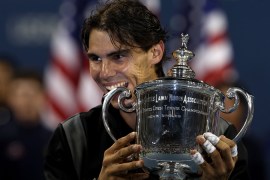 Rafael Nadal beats Novak Djokovic to win the US Open and complete his collection of grand slam titles.