Ireland could become the second euro zone member to be granted a bailout after the bloc’s ministers decided to send a joint European-International Monetary Fund (IMF) mission to the country to try tackle its debt crisis.

The team, that includes members of the European Commission and European Central Bank (ECB), will travel to Ireland on Thursday to examine what measures may be needed if Dublin decides to seek aid, euro zone finance ministers said.

The decision, which came as the ministers met on Wednesday in Brussels, the Belgian capital, is intended to prevent the crisis from spreading to other countries – months after Greece was bailed out by euro zone members and the International Monetary Fund (IMF) with a $146.2bn package.

“The Irish authorities are committed to working” with the EU, the ECB and the IMF to “determine the best way to provide any necessary support to address market risks, especially as regards the troubled banking sector,” Olli Rehn, the head of EU monetary affairs, said.

“This can be regarded as an intensification of preparations of a potential programme in case it is requested and deemed necessary.”

The government in Dublin, the Irish capital, maintains it does not need a bailout even though there has been discussion of help for its banks.

Brian Cowen, the Irish prime minister, emphasised that the mission would look at what assistance Ireland might require, and rejected suggestions his government was discussing a bailout.

“What we want to concentrate on now is … to sit down and see in what way can assistance be provided to ensure that these issues can be dealt with properly and appropriately,” he told parliament.

“There has been no question of the government … [being] in a negotiation for a bailout,” he said.

Economists said a state bailout was a distinct possibility.

“There is an air of inevitability that there will be some sort of bailout,” Alan McQuaid, chief economist at Bloxham Stockbrokers, said. “Why come to Dublin if you are not going to give a bailout?”

Before the decision to dispatch the European-IMF mission, Brian Lenihan, Ireland’s finance minister who was attending the Brussels meeting, said the team would determine what to do about the banks, which he admitted needed help.

Ireland has said the bill for bailing out its banks could top $68bn but investors fear the final figure could
be even higher given rising residential mortgage arrears, deposit outflows and higher funding costs.

Concerns that Ireland will be unable to pay the cost of rescuing its banks – which ran into trouble when the country’s real estate boom collapsed – has worsened Europe’s government debt crisis.

Markets have pushed up borrowing costs for other vulnerable nations such as Portugal and Spain and threatened to destabilise the common euro currency.

However, Lenihan added that members of the euro zone had welcomed his four-year, $20bn budget-cutting project which he is hoping to publish next week, suggesting he sees no need for further fiscal tightening.

He also denied that the country’s super-low corporation tax of 12.5 per cent needed to be raised to ease the debt.

Alan Fisher, Al Jazeera’s correspondent in Dublin, said that the Irish government has said that their forthcoming meeting with the European-IMF team was only a technical meeting.

Wednesday’s decision by the euro zone finance ministers echoed an earlier one to send an EU-IMF-ECB team to Greece as part of Athens’ rescue.

Nazanine Moshiri, Al Jazeera’s correspondent in Brussels, said: “The fear here is that if something isn’t done there could be a ripple effect that would be devastating for the euro zone.”

Portugal has warned that it is at “high” risk of needing financial support, unable to borrow money on open markets other than at prohibitive rates, partly because tension over Ireland is increasing pressure on other weak euro zone members. 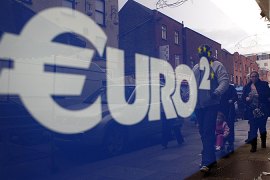 Herman van Rompuy, the EU president, says 27-nation bloc will not survive if it fails to overcome the debt crisis. 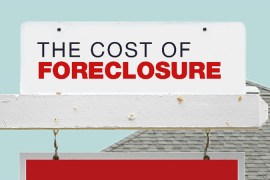 Al Jazeera examines how foreclosures have impacted ordinary people, not just in the US, but around the world.