Greece expects the budget deficit in 2010 to be larger than initially targeted after the EU’s statistics agency announced that the country’s debt last year was actually much higher than projected.

But the country, which has been struggling with a severe financial crisis for the past year and is receiving a $150bn, three-year package of rescue loans to keep it from defaulting on its debts, insisted on Monday that it was still on track to achieve an “unprecedented” six per cent point deficit reduction.

Eurostat, the statistics agency, said Greece’s 2009 budget deficit reached 15.4 per cent of gross domestic product, significantly above its previous estimate of 13.6 per cent.

That means Greece will not achieve its initial target of lowering the deficit to 8.1 per cent of GDP by the end of this year, with the finance ministry saying the 2010 deficit was now estimated to be 9.4 per cent of GDP.

“The new starting point for the 2009 deficit reveals the magnitude of the unprecedented fiscal effort made by the Greek government in 2010,” it said.

Public debt stood at 126.8 per cent of GDP at the end of last year – higher than that of any other EU state, Eurostat said.

The upward revision of debt and deficit levels was anticipated since Eurostat said there were issues with Greek data when it released its previous estimates in April.

The statistics agency said on Monday that all the issues has been addressed and it no longer had any reservations.

George Papandreou, Greece’s prime minister, remained defiant on Monday, ruling out any restructuring of his country’s debt and saying such a move would be a catastrophe for the Greek people and Europe.

In an interview with France’s Le Figaro newspaper, he said: “This scenario is out of the question.

“It would be a catastrophe for Greek citizens given the sacrifices made [to restore the country’s public finances].”

It would also be “a catastrophe for confidence in Europe and the euro,” he added.

“We are continuing on the same track. We have already disproved all those who said that Greece would not be able to put its accounts in order. The effort continues.”

Papandreou comments came during a visit to Paris where he met Nicolas Sarkozy, the French president, amid growing tensions over Ireland, Portugal and Greece as they come under intense market pressure to put their finances in order.

The reviews are part of regular checks of Greece’s implementation of the rescue loan agreement that prevented it from defaulting on its debt in May.

“Fiscal consolidation will continue within the targets and the framework of the Economic and Financial Programme agreed with the EU, ECB and IMF leading to a fiscal deficit below 3 per cent of GDP in 2014,” the finance ministry said, noting that the full measures for next year’s fiscal programme would be detailed in the 2011 budget to be submitted to parliament on November 18.

Clashes broke out in Athens on Monday between riot police and a number of protesters following street rallies staged in opposition to the government’s austerity measures.

Thousands of protesters took to the streets of the Greek capital in two separate, otherwise peaceful rallies – organised by the Greek Communist party and leftist supporters – that were timed to coincide with the inspection meeting.

The violence broke out at the end of the protest as riot police wearing gas masks fired tear gas to dispel groups of masked and hooded protesters who were throwing stones and other objects at police.

The protesters set fire to rubbish bins and piles of rubbish in the streets, which firemen extinguished.

Protesters were then chased by police through the streets and found refuge inside Athens Polytechnic University, witnesses said.

Greece has struggled to raise revenue, with figures showing it is lagging behind its targets, although it has generally performed better in spending cuts.

Without the loans, Greece would have already defaulted on its debts.

It is effectively locked out of the international bond market by the massively high interest rates it would have to pay if it were to issue bonds – a reflection of low trust in the country’s prospects.

His governing Socialist party won mayoral races in Athens and Greece’s second largest city of Thessaloniki for the first time in 24 years, while its candidates won eight of 13 regional governor races.

Portugal’s finance minister said on Monday that it was at a high risk of needing a bailout due to the danger of contagion from other debt-hit euro nations such as Greece.

“The risk is high because we are not facing only a national or country problem,” the website of the Financial Times newspaper quoted Fernando Teixeira dos Santos as saying in reference to the possibility Lisbon will need international financial aid.

“It is the problems of Greece, Portugal and Ireland. This is not a problem of only this country,” said Teixeira dos Santos.

His comments came after Ireland said on Monday that it was in talks with “international colleagues” on its budget woes but denied reports that it was seeking EU assistance similar to that received by Greece earlier this year. 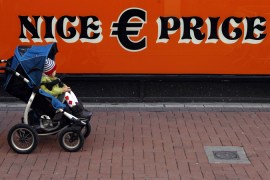 Government says it is not in negotiations over a Greece-style bailout as pressure over debt crisis mounts.