French workers have begun another day of nationwide strikes in a last-ditch effort to force Nicolas Sarkozy, the president, to scrap a newly passed pension legislation.

The strikes on Thursday led to the cancellation of roughly half of the country’s domestic flights and severely disrupted train service.

But many workers are returning to work, a day after the national assembly approved an unpopular reform to raise the national retirement age.

In Paris, demonstrators waved union flags and set off flares as they marched through the capital while in southern Marseille, they beat drums and blew whistles.

Al Jazeera’s Andrew Simmons, reporting from Marseille, said that many in France regard the first day after the reforms were passed as a “day of reckoning” as it tests the mettle of unions who have been organising strikes and protests against the unpopular measures.

Fuel blockades, which prompted outages at petrol stations, and the disruption of transportation services during school holidays, have weakened public support for the unions, he said.

“The public is showing indications that they’re getting fed up with this. So in the unions, there are two lines of thought,” said Simmons.

“The militant unions … feel they need to keep the pressure up on Sarkozy, even though these reforms are going to be law in a matter of weeks.”

Our correspondent said the moderate unions are saying that they should be pulling back and retaining public support via rolling protests until the next election in 18 months.

Sarkozy says the legislation to raise the minimum and full retirement ages by two years to 62 and 67 is vital to rein in a ballooning pension shortfall and safeguard the AAA credit rating that lets France service its debt at the lowest market rates.

The bill received the final vote of approval in parliament on Wednesday.

Al Jazeera’s Jacky Rowland, reporting from Paris, said that while France’s socialist party has challenged the reforms via an appeal to the constitutional council, that review process could take up to a month.

“But in the meantime, either president Sarkozy or his prime minister could sign the bill into law anyway,” she said.

If the constitutional council decided that the law needs to be changed, that might prove to be slightly embarrassing to Sarkozy.

“But the bottom line is that this has effectively passed. President Sarkozy, in effect, got his own way on pension reform. The question is, at what cost to his own personal popularity.”

But weeks of strikes over the plan to raise the retirement age have been tapering off.

While the country’s two main unions vowed to continue their fight, they acknowledged people were tiring of a month of strikes that came close to paralysing the entire nation.

“Even now it’s been voted, the workers are saying ‘no’ to pension reform,” Jean-Claude Mailly, the leader of the Force Ouvriere Union, said.

“We have to be clear that today we won’t go above the three million demonstrators mark. It’s the holidays, there’s a bit of fatigue – that’s obvious. 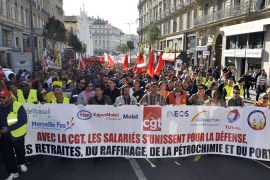 Proposed reform plan aimed at saving the government money has sparked mass protests in across the country. 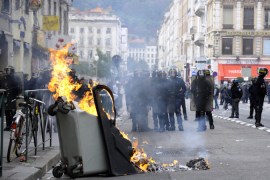 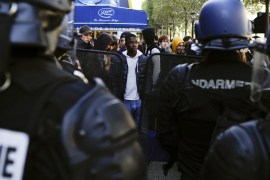