Hundreds of thousands of French workers have taken to the streets in a last ditch effort to stop the government from raising the minimum retirement age, but both police and unions said that the numbers at the protests were falling.

While the crowds marching under a sea of trade union banners presented a united front on Thursday, many protesters seemed to have stayed at home after the law overhauling the pensions system was passed by both houses of parliament.

Officials said 560,000 took part in the ninth one-day protest, compared to 1.1 million on October 19, while unions said the turnout had fallen from 3.5 to two million and admitted demonstrators were being worn down.

Eric Woerth, the labour minister and architect of the pension law, told AFP news agency, that “the significant slowing of mobilisation” against the reform lead him to “hope for an end to the crisis in the coming days or weeks”.

However, Bernard Thibault, the head of the powerful CGT union, hailed protesters for continuing to come out despite the bill being passed in parliament.

“What’s impressive is that this is doubtless the first time that the day after a law is voted we have such large demonstrations,” he said.

Thibault called on Nicolas Sarkozy, the French president, not to enact the law.

“It’s difficult to see colleagues abandon us, to see them throw in the towel,” Laurent Montels, an oil worker, said.

However, at least 270 rallies were held around the country and strikes continued to have a significant impact.

Half of domestic flights were cancelled at Paris’ second airport Orly, and authorities said that one-third of them would be cancelled at the city’s main international airport, Charles de Gaulle.

Fuel supplies, which were last week threatened by fuel depot blockades, are returning to normal, according to industry officials, but one-in-five filling stations is still out of petrol and half of France’s refineries are still on strike.

At least one more day of action is planned on November 6, but the French parliament has approved Sarkozy’s pensions bill and his aides say he intends to sign it into law on or around November 15.

“It may look like Sarkozy has won, but at what cost, remains to be seen,” Al Jazeera’s Jacky Rowland, reporting from Paris, said.

The president’s approval rating is at a new low of 29 per cent, but he hopes the victory can help restore his political fortunes in the run-up to re-election in 2012.

Sarkozy’s administration has all along insisted that raising the retirement age is not only necessary but “inevitable”, with the French population ageing and the public deficit expanding. 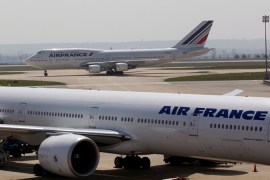 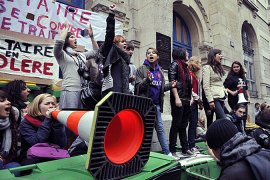 Parliament gives final approval to bill that will raise retirement age after weeks of protests by unions and students. 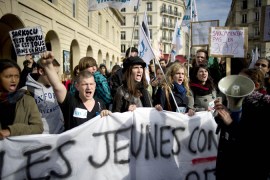 French protests ease ahead of vote

Protests by students and workers against pension reform appear to be losing steam ahead of parliament vote to pass bill.