Romania’s government has survived a no-confidence vote in parliament over deep spending cuts and tax rises, needed to maintain international aid for its recession-hit economy.

Wednesday’s final count showed 218 parliamentarians voted for the opposition motion, compared to the 236 votes needed for a majority.

The vote had attempted to topple Emil Boc, the prime minister, who has slashed public wages by a quarter and raised value added tax by five percentage points.

The motion also comes as the International Monetary Fund (IMF), which approved a $27.8bn loan last year to help its ailing economy, is reviewing the aid deal.

Earlier, up to 30,000 people rallied in front of parliament in Bucharest, the capital, military police told the AFP news agency, while unions said 80,000 people had joined the protest movement.

Nurses, teachers, police officers, statisticians, electricity plant workers and many other civil servants converged on Bucharest from all over the country.

“They cut our salaries, our bonuses, they raised taxes. We practically have no money left to live,” 49-year-old Maria Dumitras, an accountant, told Reuters.

“I wish with all my heart this government would leave. We need other rulers that care for people and not for their own interests.”

Al Jazeera’s Alan Fisher, reporting from Bucharest, said although the IMF, World Bank and EU back the government’s spending cuts, “the people don’t”.

“The latest opinion polls give them [the government] an approval rating of just 15 per cent, the lowest they have ever been,” he said.

The country, the second poorest in the EU, experienced an economic contraction of 7.1 per cent in 2009. 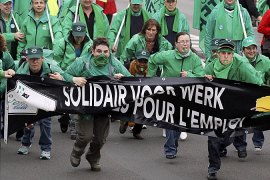 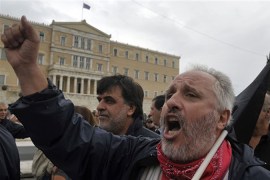