Students across France are staging fresh protests against an unpopular overhaul of the pension system, expected to be passed by politicians later this week.

The main demonstration is expected to take place on Tuesday afternoon outside the senate building in Paris, the capital, near streets made famous by the May 1968 revolt.

But despite new action the mass movement against plans to raise the age of retirement appears to be losing steam, with union leaders admitting that with the bill about to become law they will have to change tactic.

“The movement is not finished. It will continue. It will take other forms. The subjects it has raised are not closed, whatever happens in the coming days,” Bernard Thibault, head of the CGT union told state television.

Francois Chereque, leader of the CFDT union said that as the parliamentary debate on the bill ends unions would be “looking at it from another perspective”.

“We’re not calling into question the legitimacy of parliament … but a law is always perfectible.”

Road blocks at the country’s largest oil port in Marseille were bulldozed by authorities on Tuesday and rotting piles of trash are expected to be cleared soon, with garbage collectors agreeing to return to work, signs that the movement is beginning to wrap up.

Five of France’s 12 mainland oil refineries were also said to be back up and running after strikes that shut them down caused major fuel shortages.

Brice Hortefeux, the French interior minister, said there was a “gradual but steady” return to normal
of supplies to service stations.

Jacky Rowland, Al Jazeera’s correspondent in Paris, said students were hoping to keep the protest spirit alive by their action on Tuesday.

“They have two main objectives. One is to show that despite the university holidays they are still active.

“But the other key objective is to keep up the momentum in a campaign of protests and strikes which some people are starting to predict is running out of steam,” she said.

“I think the students are trying today by bringing, they hope, large numbers of people onto the streets that they will keep up the momentum and keep the issue on the agenda.”

The developments come after two weeks of protests by unions and students that saw millions taking to the streets and a nation gripped by fuel shortages.

Strikes are continuing but without the vigour seen last week. On Tuesday a few dozen people from the CNT and SUD Solidaire unions blocked a buses depot in Neuilly Sur Marne, an eastern suburb of Paris.

The blockage stopped more than 50 buses connecting the French capital to its eastern suburbs. Police watched the protesters without any intervention.

Nicolas Sarkozy, the French president, has stood firm throughout the weeks long protest movement, insisting the reform is necessary to save the money-losing retirement system and ensure funds for future generations as life expectancy increases and the nation’s debt soars.

The bill to overhaul France’s pension plan is to be voted on this week by the two houses of parliament, likely by Wednesday, officials said after a meeting of a committee that wrote a final version of the legislation to raise the retirement age from 60 to 62. It is all but certain to pass.

Besides raising the minimum retirement age to 62, it increases the age to access full retirement benefits from 65 to 67.

The French finance minister announced that the strikes are costing the national economy up to 400 million euro ($557m) each day, as workers continued to block other oil refineries and some rubbish incinerators.

Final passage of the pension reform legislation through parliament this week has not deterred unions, which have already announced two new nationwide protests – for Thursday and November 6.

The demonstrations against the retirement reform have brought millions into the streets, and polls have shown that most French people support the strikers. Meanwhile, the conservative Sarkozy’s popularity is plummeting.

A poll published in Sunday’s Journal du Dimanche newspaper showed that only 29 per cent of those surveyed were satisfied with Sarkozy’s performance. It was the French leader’s lowest rating since taking office in 2007. 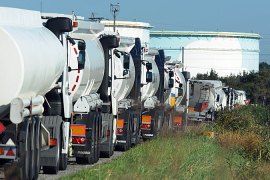 Industry body says oil refineries across the country have been cleared of blockades set up by striking workers. 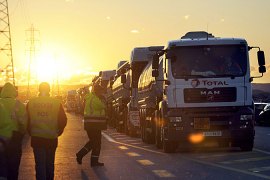 Finance minister gives warning that long-running action against pension revamp is costing country up to $562m a day.