Fifa has reportedly started an investigation into Spain/Portugal and Qatar’s bids to host the 2018 and 2022 World Cups after allegations that they agreed to exchange votes to win their respective competitions, according to the UK’s Daily Telegraph newspaper.

Football’s world governing body said at a news conference on Wednesday that two bids were being investigated, but the nations allegedly involved have only been named by the Daily Telegraph, citing sources at Fifa, on Thursday.

“We got the information [about collusion] a few weeks ago, and there have been rumours saying that it definitely took place,” Jerome Valcke, the Fifa general secretary, said at the news conference.

“We said that we should ask the ethics committee to look at the case.”

If any bidding country is found guilty they could be expelled from the process, but Fifa on Wednesday were reluctant to discuss this possibility, saying there were numerous stages to pass before such a drastic measure might be taken.

The two bidders are accused of agreeing to trade blocs of votes over which they have influence, with Qatar’s supporters allegedly agreeing to throw their weight behind Spain/Portugal and vice-versa, according to the Daily Telegraph.

Spain/Portugal are competiting with England, Russia and Holland-Belgium for the 2018 competition, while Qatar are up against Australia, Japan, South Korea and the United States for 2022.

Valcke denied on Wednesday that holding the races for 2018 and 2022 simultaneously had left them open to abuse and said that the decision on the bids would go ahead on December 2 as scheduled.

“The process for 2018 and 2022 has been perfectly well managed and the ethics committee has made several interventions to make sure that the bids are complying with the rules,” he said.

The inquiry was announced along with the suspension of two senior Fifa committee members over allegations they attempted to sell their votes.

Fifa’s ethics comittee is investigating Amos Adamu of Nigeria and Reynald Temarii of Tahiti, who were alleged by an undercover investigation by the UK’s Sunday Times newspaper to have offered their votes for the 2018 and 2022 competitions for money.

Sepp Blatter, Fifa’s president, said that the investigation into Adamu and Temarii marked a “sad day for football”. 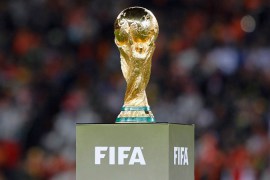 Fifa investigates two members who allegedly offered to sell their votes in support of a country bidding for 2018 event.