Rio Tinto and BHP Billiton, two of the world’s three biggest mining firms, have discarded a plan for a joint iron-ore venture in Western Australia after regulators in Australia, Europe and Asia held up the move.

The decision on the planned project in the remote outback Pilbara region was announced on Monday after facing anti-competition accusations from Chinese clients as well as regulators.

The two Anglo-Australian firms said that they were disappointed at the breakdown of the deal, worth $120 billion and which was expected to save a total of $10 billion in shared costs.

“However, it has become clear that this transaction is unlikely to obtain the necessary approvals to allow the deal to close and as a result both parties have reluctantly agreed to terminate the agreement.”

The European Commission, Australia, Japan, South Korea and Germany had all refused to approve the deal, according to Rio Tinto. The move was also strongly opposed by industrial powers in China, the world’s leading iron ore consumer.

Some regulators refused the deal outright while others wanted changes made to it which were unacceptable to the two firms.

Pilbara is rich in mineral wealth, but its remote location means that companies have to spend millions of dollars on infrastructure to serve working there. 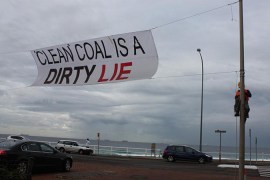 Environmental activists attach themselves to machinery inside the world’s largest coal port to protest global warming. 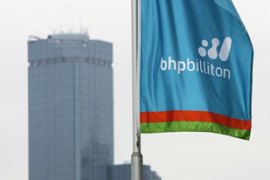 World’s biggest miner says it is cooperating with US corruption investigation.

BHP Billiton says it will close an Australian nickel mine and could close many more.