The $476m takeover by New England Sports Ventures was completed on Friday after a bitter court fight with the club’s previous American owners, Tom Hicks and George Gillett Jr.

“As every Liverpool fan knows, the most nerve-wracking way to win a match is in a penalty shoot-out but in the end, as long as you get the right result, it is worth the wait. And we have got the right result,” Martin Broughton, Liverpool’s chairman, said.

The deal went through after the duo withdrew the temporary restraining order blocking the sale they had obtained in a Texas court, but they vowed to pursue a claim for $1.6bn in damages.

Friday had been set as the deadline for repayment of the club’s debts to the Royal Bank of Scotland and Wells Fargo, which have risen to around $460m.

Liverpool said the takeover had eliminated all of the acquisition debt placed on the Premier League club by their previous owners.

“The transaction values the club at 300 million pounds [$476m] and eliminates all of the acquisition debt
placed on LFC by its previous owners, reducing the club’s debt servicing obligations from 25-30 million pounds a year to 2-3 million,” Liverpool said in a statement.

Attorneys for Hicks and Gillett, who claim the NESV offer undervalues the 18-time English champions, called the sale an “extraordinary swindle.”

“This outcome not only devalues the club but it also will result in long-term uncertainty for the fans, players and everyone who loves this sport because all legal recourses will be pursued,” Steve Stodghill, the Texas attorney representing Hicks and Gillett, said.

The outcome will be welcomed by many of the club’s fans, who have held frequent and vociferous protests against Hicks and Gillett.

“The reaction of the fans in Liverpool is one of cautious optimism,” Al Jazeera’s Stuart Silvers, reporting from London, said.

The club have suffered their worst start to a season for more than half a century, sitting in the relegation zone with just six points from seven games after a 2-1 defeat to Premier League newcomers Blackpool two weeks ago.

John W Henry, the new owner, sought to win over the supporters after the deal went through, saying he was “proud and humbled” to be in charge at the famous football club.

“We regard our role as that of stewards for the club with a primary focus on returning the club to greatness on and off the field for the long-term.

“We are committed first and foremost to winning. We have a history of winning, and today we want LFC supporters to know that this approach is what we intend to bring to this great club.”

But Andrew Cheal, a freelance sports journalist in the UK, said that “jury is still out” on the new owners.

“They’ve done good things with the Boston Red Sox but if you are a Liverpool fan you might be saying ‘hang fire, we’ve already been owned by one American company and we’re not too sure about this lot’,” he said.

“I think as long as they are in it for the football and aren’t just in it for the fast buck then fans will accept that … but you have got to look at it as a four, five, six, seven, eight-year plan.”

Roy Hodgson, Liverpool’s manager, welcomed the takeover, which comes ahead of a game against local rivals Everton.

“There’s no doubt a cloud has been lifted from the football club today,” he said.

Hodgson said he had spoken to Henry but had been given no details of how much money might be available to buy new players in the next transfer window.

“We didn’t talk about investment but that said, the mere fact that the club will be taken over and the debts wiped off immediately puts us into a very different financial position to the one we’ve been in,” he said.

Hodgson said the club could not blame the takeover saga for the poor results, but said it would be good that the players would no longer have the uncertainty of the ownership issue hanging over them.

“No doubt the players will be able to get on now with playing football without having to any questions to answer or having any fears,” he said. 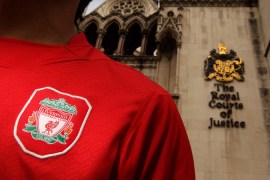 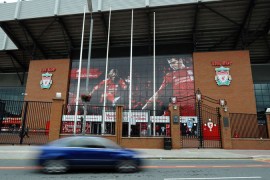