French Unions have launched another strike against pension reform – the fourth major action in a month.

It comes as the unpopular pension reform bill edges closer to becoming law.

Trains and airports are running well below capacity and marches are planned across the country. 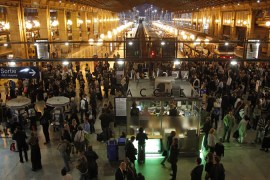 Transport workers strike against plans to raise the retirement age, with millions set to protest later on Tuesday.