South African public workers unions have suspended a nationwide strike involving 1.3 million civil servants that has threatened to bring the economy to a halt.

The strike was suspended on Monday despite claims that it would continue until demands for improved wages and benefits were met by the government.

The suspension came after 20 days without work, but a union worker said that it had not yet agreed to the latest offer from the government.

Rather unions have made the move in order to discuss the government’s latest proposed deal.

Thobile Ntola, president of the South African Democratic Teachers Union, the largest civil service union, emerged from meetings with other unions to make the announcement.

“There comes a time in any strike in which we must weigh our options,” Ntola said.

Further details were expected later on Monday at a briefing for reporters.

Chris Klopper, of the Independent Labour Caucus, said: “We suspended the strike immediately, we expect workers to go back to work immediately and that means tomorrow.”

The unions had set a deadline of September 2 for the government to provide a 8.6 per cent rise in salaries and a 1,000 rand ($138) monthly housing allowance.

There was some discord from union members over the suspension of the strike.

“We want 8.6 per cent and will stop at nothing. If our leaders think they can ignore our views, they are sellouts,” Ken Khuzwayo, a teacher from Mpumulanga province, said.

The government is offering a seven per cent pay hike and 630 rand for housing, saying that it cannot afford the workers’ demands.

Schools and hospital services have been hit by the strikes.

The labour unions had warned that they will cut ties with the ruling party, and widen a national public sector strike, unless their pay demands are met.

Al Jazeera’s Barnaby Phillips, in Pretoria, said: “In the short-term these workers will be going back to their jobs and South Africans will be pleased to know that hospitals and schools should resume work as normal.

South Africa has been hit hard by the global recession, losing 900,000 jobs last year on top of already high unemployment.

The government has said it wants to devote funds to creating new jobs, not just raising the salaries of those already working. 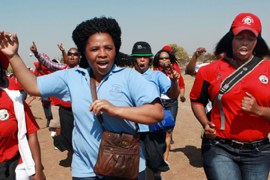 More than a million public sector workers are protesting against their bad pay. 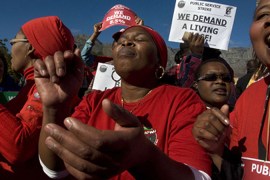 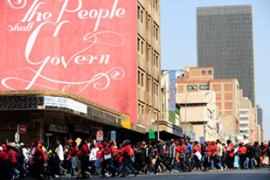 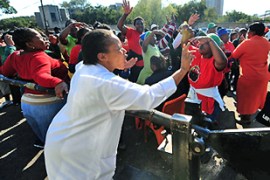