French workers have launched a day of mass protest against Nicolas Sarkozy’s plan to raise the retirement age.

Unions called Tuesday’s strike in order to derail the pensions overhaul bill, the centrepiece of the president’s political agenda, which was to be presented to parliament later in the day.

By midday around 450,000 people had already taken part in rallies around France, according to the interior ministry.

Unions are hoping to match the level of a similar protest in June, when between up to two million people marched in towns and cities across the  country.

“We can see that employees are mobilised,” Francois Chereque, leader of the CFDT union, told RTL radio, predicting that the turnout would match or more likely exceed that of June.

Bernard Thibault, head of the larger CGT union, warned on Europe 1 radio: “If we don’t get a hearing there will be further steps to  this mobilisation, and nothing has been ruled out.”

But analysts have said that a massive turnout on Tuesday was unlikely to deter the government from going ahead with its plan to raise the retirement age from 60 to 62.

“The significant … is the timing. It’s the start of the new political term in France, the lawmakers are today sitting in the French parliament and trying to begin to push this bill through.”

“It’s the first time a president or prime minister has pushed for a comprehensive pension reform. So this time his reputation is at stake, less than two years before the next presidential elections.

“So he has to win otherwise his reputation will be in tatters.

Ministers have done little to lower the temperature in the  run-up to the day of action, insisting pension overhaul is essential to balance pension accounts by 2018, reduce the public deficit and preserve the country’s credit rating.

The increase in age would still be well under the average of around 64 in the OECD group of wealthy democracies, despite France having one of the world’s longest life expectancies.

But French workers also pay high social charges on their salaries through their career and need to build up relatively long periods of paid employment to qualify for a full state pension.

Retirement at 60 was seen as one of the left’s signal victories in the first term of late Socialist president Francois Mitterrand, and its defence is seen as a bulwark against future liberal economic reform.

According to opinion polls some two-thirds of voters think Sarkozy’s plan is unfair and support the day of protest, but two-thirds also think the strikes will make no difference.

Meanwhile, across the channel, millions of workers in Britain’s capital were struggling on Tuesday to get to work by road, rail boat and bicycle as a strike by London Underground workers shut down much of the city’s metro system.

Thousands of maintenance workers, drivers and station staff walked off the job for 24 hours in a dispute over planned job cuts that they say will hit service and safety.

More than 3.5 million people use the metro system, known as the Tube, daily. Transport for London said on Tuesday some services were operating on six of the city’s 11 subway lines.

The Rail, Maritime and Transport Union said support for the strike was strong and only a skeleton service was running.

Buses were packed, and thousands of people were expected to use extra boat services on the Thames river. 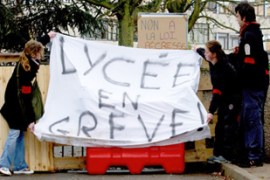 Nationwide walkouts by transport workers are already in their seventh day.