Barack Obama, the US president, has unveiled an ambitious plan to revamp US transport infrastructure in a bid to kickstart the country’s ailing economy ahead of forthcoming mid-term congressional elections.

Obama is expected to face intense pressure over the economy in the run-up to the November 2 election, which could see his Democratic Party lose control of Congress under a barrage of Republican criticism.

The $50 billion plan, which was formally announced by Obama on Monday, outlines improvements to the US road system, an acceleration of high speed rail projects, and establishes a centralised “Infrastructure Bank” to coordinate planning and funding the projects.

It targets rebuilding 240,000 kilometres of roads, adding 6,400 kilometres of rail and replacing 240 kilometres of airport runway. The plan is designed to answer critics who have said the American highway network is in poor condition and to create jobs at a time of high unemployment in the US. Almost one in ten Americans out of work and the economy shedding jobs every month.

The White House says the plan could be paid for by cancelling tax breaks for American oil and gas companies, thus avoiding adding the country’s spiralling national deficit.

“This is a plan that will be fully paid for. It will not add to the deficit over time -we’re going to work with Congress to see to that,” Obama said as he outlined the proposals.

But plan has been met with stiff opposition from Republicans, who see the initiative as the Obama administration attempting to spend its way out of trouble.

“A last-minute cobbled-together stimulus bill with more than $50 billion in new tax hikes will not reverse the complete lack of confidence Americans have in Washington Democrats’ ability to help this economy,”  Mitch McConnell, the Senate Republican leader, said in a statement.

“After the administration pledged that a trillion dollars in borrowed stimulus money would create four million jobs and keep the unemployment rate under eight per cent, their latest plan for another stimulus should be met with justifiable skepticism,” he said.

John Boehner, the Republican leader of the house of representatives, was equally dismissive of the president’s plan.

Obama admitted on Monday that there is no “silver bullet” for the economy, but pledged to dedicate his presidency to improving the economic plight of many Americans. “I am going to keep fighting, every single day, every single hour, every single minute to turn this economy around,” he said.

Administration officials have said that they hope the plan will be passed into law quickly. “The economy needs additional investment as quickly as possible,  but we want to do something that will help the economy over the next six years,” a White House official said.

But it is unlikely that the investment plan will be passed by Congress before the mid-term elections, which are being seen as a referendum on Obama’s economic managment during his first two years in office.

If, as feared by many Democrats, Republicans win back control of the Congress in the elections, Obama will find passing legislation more difficult, as Republicans have overwhelmingly rejected his calls for a bipartisan approach to tackling America’s economic difficulties.

The infrastructure plan is part of wider bid by the White House to stimulate slowing growth rates. The US saw second-quarter growth of just 1.6 per cent after first-quarter figures of 3.7 per cent, raising fears that the country is slipping back towards recession.

On Wednesday Obama will visit Ohio, also badly hit by the recession and its aftermath, where he will unveil a $100 billion series of tax-breaks for small businesses. 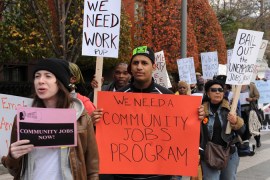 US unemployment edges up to 9.6%

Economy loses another 54,000 jobs but figure is better than 120,000 jobs many economists feared might be lost. 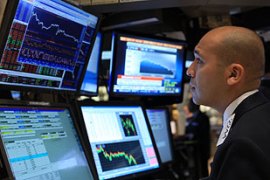 Bernanke ready to act on economy 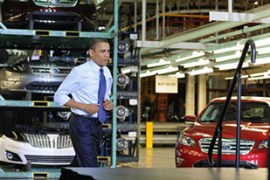 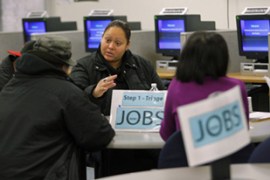