Anti-war protesters in Dublin have thrown shoes, eggs and plastic bottles at Tony Blair, the former British prime minister, as he arrived at the first public signing of his memoirs.

About 200 people in the Irish capital shouted that Blair had “blood on his hands” over the 2003 Iraq war when he arrived at the bookshop on Saturday amid tight security. The projectiles did not strike Blair.

His book, entitled A Journey, contains his defence of Britiain’s decision to go to invade Iraq under his leadership. It was launched earlier this week and has been an immediate top seller.

Some of the protesters scuffled with police and at least two people were arrested.

Blair spent about two hours in the store before emerging to more shouts and hurled eggs. He was quickly driven away.

He was paid a $7m advance for the memoirs, which outline the reasons for his policies during his decade as prime minister, including the invasion of Iraq, which he writes that he does not regret.

Blair has said that he will donate the advance and all of the proceeds from the book to a UK charity for wounded troops.

Several hundred people who were not involved in the demonstrations also queued at the bookshop to receive a signed copy of the book.

Killian Kiely, 21, was among those who met Blair.

“I wanted to see him, he is one of the most important leaders of his generation, though there is a lot I would disagree with about his policies,” he said.

“I just wanted to see him in the flesh.”

Blair is planning to hold another book signing in London on Wednesday, which anti-war activists have said that they will target.

Baria Alamuddin, the editor at large of al-Hayat newspaper, said that Blair can expect protests to follow him when promoting his book.

“This shows the strong feeling still among the populations around the world when it comes to him taking part in the wars in Iraq and Afghanistan.”

With Bertie Ahern, his Irish counterpart at the time, Blair negotiated the 1998 Good Friday Peace agreement which ended decades of violence in Northern Ireland. 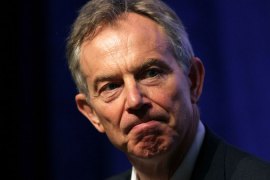 Former UK prime minister’s memoirs reveal that he did not foresee the “nightmare” that followed 2003 invasion. 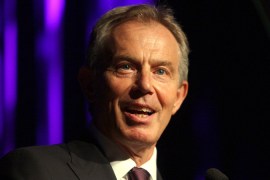 Inside Story discusses the impact of Tony Blair’s memoirs two years after he left office.