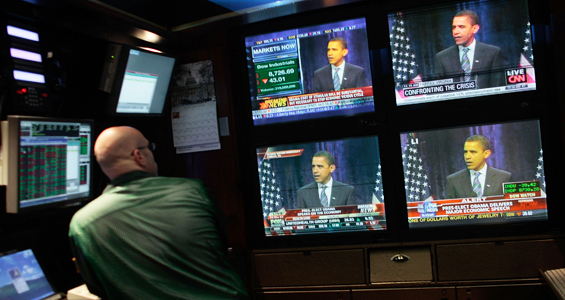 A 10-year advertising deal for the LA Galaxy and, temporarily, AC Milan football player, had come to an end.

Apparently the fizz could be coming out of the 33-year-old’s brand.

Time is not on his side. A sportsman’s career much like that of an actress or model is short. Beckham is still the face of Adidas, Gillette and Vodafone, to name a few brands, but it’s his on-the-field legacy that he really cares about.

Regular exercise can keep a player on his feet but time is catching up with all of us.

Economic booms are much the same. They have a limited time span and bubbles pop – despite the best efforts of central bankers and governments.

Much like a physio running on to the field of play to help an injured player with his magic sponge, central banks stepped in with interest rate cuts every time consumers or investors ran out of the will to spend.

Just as a player gets injured he may need to come off the pitch and sit on the bench – for how long is anyone’s guess.

Consumers and investors are much the same, believing the good times would never end they accumulated more debt than they could repay comfortably.

With the US announcing that a record number of people are now unemployed, the full effects of the economic downturn are becoming apparent.

Recessions, history tells us, usually last about a year.

Not this one. After the collapse of banks, a recession can last twice as long.

Economists, on the whole, predict a recovery of sorts some time late this year, but after a few false starts this could drag into 2010.

If lessons have been learnt from previous crises, then the trillions of dollars being thrown around by governments at this recession may save us from a 1930s-style Great Depression.

Central bankers and governments are doing as much as they can to unfreeze the credit markets.

The US bailout, it may surprise some, is not $700 billion as advertised – it is more than $8 trillion.

The problem for western economies is that consumers have so much debt it will take years to pay them off as real wage increases have never materialised.

In the United States, household debt stands at almost $14 trillion – that’s up from $8 trillion in 2002. Anyone with a loan at this point, in fear of losing their job, is unlikely to go on a spending spree.

House prices have risen by three to four times the rate of economic growth.

In truth, average house prices in Britain and the US need to halve so that first-time buyers can actually afford to get on to the property ladder.

More than 50 per cent of mortgages are interest only. At some point in the future these mortgages have to be repaid.

Most will be praying the economy will turn around and must be awaiting the next property boom. That may not materialise for another generation.

Further problems arise because more and more producers are moving abroad – mostly to China and India.

In their place lower paid service sector jobs are being created such as at Wal-Mart and Tesco supermarkets stores. Consumer electronics and some of the best made cars are all made in the Far East.

The global auto industry is crippled. For too long the leaders in this industry – the big three in Detroit – have been treating their customers with contempt.

In producing what some perceive as the world’s worst cars – rather than leading the move to more fuel-efficient vehicles – they have been willing to sit on their hands hoping the inevitable sky-rocketing gasoline prices would never catch up with them.

A similar malaise has blighted the banking industry.

There have been 100 – yes, 100 – similar banking crises in the past century indicating that someone hasn’t being paying attention.

Governments and central bankers must share the blame. They would argue they are not to know whether economic growth is virtuous or not.

The simple answer to that is when home buyers are re-mortgaging in order to pay for a holiday, that is not productive growth.

When developments arrive like dotcoms that have no revenue sources, you know something is wrong. Markets have proven they cannot function without intervention.

Many are betting on Brazil, Russia, India and China – the BRICs – to provide most of 2009’s growth.

This may occur, but the problem is they are still hugely dependent on the West for their growth.

China and India need to encourage their people to buy more of the world’s products. Over time, just like all other economic powers they will achieve this, but not just yet.

Unless oil prices recover from more than $30 a barrel, it is highly unlikely that Brazil and, most importantly, Russia will offer anything to the global economic party.

Merrill Lynch expects prices to drop to $25 a barrel, which is feasible if the global economy continues to worsen.

This would not be good news for oil producers in the Middle East who, in order to sustain growth, need those prices to rise.

They have built up sufficient financial reserves to sustain growth over the next year or so but, as more of its debt comes up for renewal, Dubai may be forced to turn to Abu Dhabi for help.

Jobs are already disappearing in the property sector – one of the main contributors to its growth – and property prices in Dubai will fall by as much as 50 per cent.

But for some, the slump will be a drop in the ocean. The likes of David Beckham need not worry, his home on the artificial island that is the Palm Jumeirah has risen 10-fold in value to $16 million in the past six years.

The concluding part of When The World Went Bust, Al Jazeera’s special look at the financial crisis, can be seen from Saturday 10 January at the following times GMT: