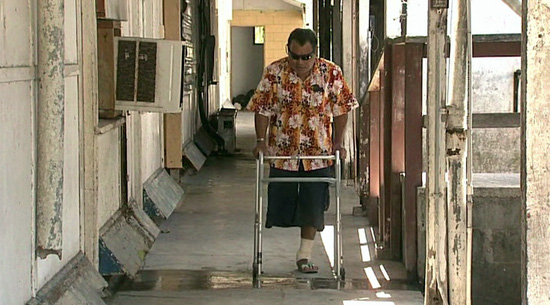 Like Henry Harris, about a third of Nauru’s population suffer from diabetes

At 52 years of age, Henry Harris is learning to walk again.

He suffers from diabetes which helped accelerate an infection from a wound on his toe leading to the amputation of his right leg.

In and out of hospital for most of the past year, Henry is slowly becoming accustomed to his new life.

“I would’ve served others where as now they’re serving me, which is quite a burden for my family and the hospital,” he says.

Henry undergoes regular check-ups on his blood pressure and sugar levels thanks to a World Diabetes Foundation project.

The foundation is here because the tiny Pacific island of Nauru has the highest rate of diabetes on the planet.

Roughly four fifths of the island’s 13,500 population are obese and an estimated 30 per cent has diabetes.

Most of them are type-two diabetes, caused by a lack of exercise and poor diet.

Just three per cent of Nauruans eat fruit and vegetables regularly, opting instead for processed and fast foods.

That means Nauruans have a dramatically reduced life expectancy – for men it’s under 50 years.

Eva Gadabu, coordinator for the World Diabetes Foundation project, says the problem is compounded by ignorance.

“Whereas the earlier you detect it the better chances you have of looking after your diabetes so you don’t get complications.”

When Nauruans looked to the sea to provide most of their food, diabetes wasn’t a problem.

But phosphate mining transformed the island’s fortunes, bringing in huge royalties to almost everyone, their diets and lifestyles changed forever.

The phosphate wealth has now disappeared but the diet remains.

The most popular food at the local store is canned meat which has helped make Nauru’s obesity rate also the highest in the world.

Health Minister Mathew Batsiua is leading the way to a solution through a government-sponsored exercise programs.

Every Wednesday they walk four kilometres around the airport.

With only two planes landing here each week, some still take a short cut, but the minister says education is the main aim.

He say the objective is to give Nauruans options “so they can limit what they usually take in terms of canned foods and have a look at stuff which they can grow on island and consume.”

But there are no easy fixes – a long drought makes it hard to grow your own food and much of the island has in any case been ravaged by decades of phosphate mining.

All of which leads to a difficult path for the island of Nauru to find a healthier future.