Five years since the the US began its invasion of Iraq, the world’s largest economy is struggling to cope with the cost – estimated to be at least $500 billion and rising.

Two prominent US economists say the Iraq war and the US economy are now inextricably linked.

Joseph Stiglitz, the Nobel-prize winning economist, and Linda Bilmes, authors of “The Three Trillion Dollar War,” argue that the Iraq war will cost the US at least $3 trillion and possibly as much as $5 trillion.

Bilmes, a budget and public finance expert at Harvard University’s Kennedy School of Government, told Al Jazeera that “both in a long-term sense and a short-term sense, the United States is worse off economically speaking because of the war.

“In a long-term sense, we have added already about $800 billion to our national debt as a result of the borrowing and the war,” she said.

“In the short-term sense, we are spending $12 billion a month in Iraq alone and that clearly limits the amount of money that we have to provide things like economic stimuli to improve the economy.”

Oil prices go up, not down

Washington’s overall spending on domestic programmes outside of defence, such as education, highways and law enforcement, has grown.

But over the seven years of the Bush presidency, the funding for these programmes represents a declining share of the budget and economy.

Bilmes said her study looked at the total cost of the war, which includes the total amount of money that has been spent to date, the cost of taking care of veterans when they return, providing disability compensation to veterans, replenishing military equipment and the cost of borrowing.

And whatever the reasons for the US bombing of Baghdad, cheap oil has not been the result.

In fact, the price of oil has climbed from $25 a barrel to a staggering $110 over the past five years.

“The price of oil is an interesting issue. The oil price was $25 per barrel before we invaded Iraq and it’s about $110 per barrel now and we only included in our model a very small percentage of that,” Bilmes said.

However, others say that $3 trillion is a price worth paying by the US.

Robert Shapiro, a former undersecretary of commerce in the Clinton administration and fellow at the Brookings Institution says the figure would be a small price to pay for stability in the Middle East.

“The Bush administration in Iraq is not driven by economics,” Shapiro said. “They are driven by judgments about the impact of this policy on the role of the United States in the world and that’s as it should be.

“If this policy were sound and successful for the people of Iraq and for the stability of the region, this $3 trillion debt over a period of time will be a small price to pay and one that the American people will pay gladly.”

Others also argue that the real cause of the US’ economic woes is not the war in Iraq, but the subprime mortgage crisis and the housing market collapse.

Dean Baker, a co-director of the Center for Economic and Policy Research, a Washington think tank, told Al Jazeera that tying the recession to the Iraq war was a mistake.

“It’s like someone who doesn’t take care of themselves, doesn’t exercise, eats lots of junk food, so they are in bad shape and get pneumonia,” Baker said.

“You know they are going to have a harder time dealing with pneumonia because they hadn’t been in good shape before they got it.

“I would say that is the same thing with the war and the recession, that if we hadn’t blown $180 billion a year on the war we would have been better prepared, we would have had a better educated workforce, better infrastructure, a better position to deal with the recession.”

But Bilmes said the borrowed trillions have to come from somewhere.

“The money is borrowed in the capital markets and approximately 40 percent of the money that is borrowed this way is financed from overseas,” she said.

“We had to borrow all the money that we’ve used to wage the war and of course we would have to pay interest on that money that we borrowed as well as repaying that money itself. So this really is a transfer of the cost of the war to the next generation.”

Thus, any idea that war is good for the economy, Bilmes argued, is a myth. 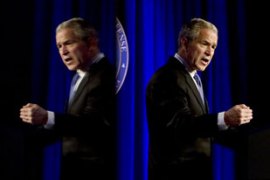