Over the centuries China’s cultural and social impact has been huge, producing some of the world’s most influential technological developments – namely paper, printing, the compass, gunpowder and even, according to some archaeologists, toilet paper.

China’s unique identity lies in its longevity and resilience as a distinct unit, despite periods of civil unrest, famines, military defeats, and foreign occupation that have engulfed the country.

In the initial decades after the communist takeover in 1949, China’s economy stagnated.

But since the introduction of the so-called “open door policy” in 1980s China has transformed itself into an industrial powerhouse and the world’s fastest-growing economy.

Internationaly China’s growing wealth and appetite for natural resources – especially oil – has given it increasing diplomatic clout on the world stage.

But China has had to balance its economic growth with concerns over the enviroment, with pollution and dessertification becoming increasing problems as cities and industries expand rapidly.

On the domestic front, worries over the country’s growing wealth gap, unemployment and unrest over corruption are fast becoming the biggest challenges facing the country’s rulers.

According to the latest version of the constitution, adopted in 1982, the People’s Republic of China is a “socialist state under the people’s democratic dictatorship”.

Effectively this means that China is a one-party state ruled by the Communist Party of China (CPC), although there are other “democratic parties” which are represented at annual meetings of the country’s legislature.

Since March 2003, the country’s president has been Hu Jintao. He also holds the post of chairman of the CPC.

Since his appointment Hu has pledged to tackle corruption and given warning of the dangers posed by the fast-growing rural-urban wealth gap.

However, he has firmly rejected introducing any Western-style political reforms to China, saying that this would lead the country down a “blind alley”.

To date the only slight moves toward political liberalisation have been the opening of elections at the town and village levels.

Stretching for more than 5,000 km from the deserts and mountains of Central Asia to the Pacific Ocean, China covers a vast range of landscapes.

Chinese territory includes the highest point on Earth, at the summit of Mount Everest, to the planet’s second-lowest point in the Turpan Basin, in the deserts of the country’s northwest.

The bulk of the population is concentrated in the eastern half of the country, home to China’s largest cities and its most fertile land. 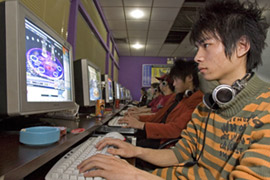 There are an estimated 137 million
internet users in China [EPA]

China now has the world’s fastest-growing economy and is on track to become the biggest consumer of energy and natural resources – as well as the biggest polluter.

The country’s role in world trade has steadily grown since the late 1970’s, when the government, headed by reformer Deng Xiaoping, decided to open China’s door to the global economy.

Despite being officially a communist country, privatisation of state-owned industries means that currently about three-quarters of the national economy is held in private ownership.

The government’s decision to let China be used by Western firms as an export platform is making the country an increasingly competitive threat to its regional neighbours such as South Korea, Singapore, and Malaysia.

China’s government has set 8 per cent as the growth target for 2007 but the central bank forecasts growth at 9.8 per cent and the World Bank says 10.4 per cent. 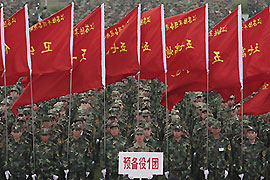 China has the world’s largest standing military and since 1949 has fought wars with South Korea, India and Vietnam.

Since then it has developed thermonuclear weapons (hydrogen bombs) and a neutron bomb.

China is thought to have about 400 strategic and tactical nuclear weapons, and stocks of fissile material sufficient to produce a much larger arsenal.