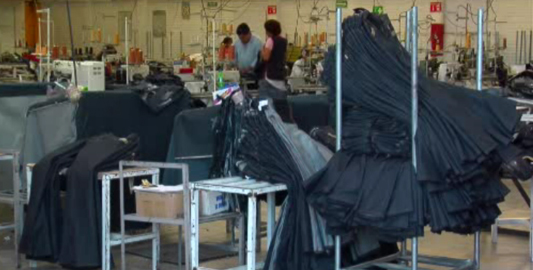 Once a world leader for cheap clothing, Mexico in recent years has become increasingly unable to compete with low priced imports from China, this has lead some factories to lay off workers and even ignore labour laws in an effort to stay competitive.

Many of Mexico‘s garment workers are paying a high price for economic competition with China. Al Jazeeera’s Franc Contreras has this report from Mexico‘s blue jeans capital.

Many Mexican workers consider themselves lucky to have a job in the blue jean factories in the southern city of Tehuacan, even though they work 10 hours a day, six days a week and earn just $400 a month.

But in recent months, many factories have been cutting back on their labour force, blaming the economic crisis on tough competition from China.

Gil Aleman, a clothing industry spokesman in Tehuacan, said: “Millions of people in this country prefer to buy the most affordable clothing, that’s Chinese.”

“We want to be the one who make the clothes Mexicans wear. But we can’t compete. The Chinese market is killing us.”

In light of increasing competition some factories are turning to even lower wage labour in illegal assembly plants.

Workers recruited to work in these makeshift factories work 10 hours a day under unregulated working conditions and earn $50 a week, sometimes less.

Some of the workers employed in these illegal plants are children – a clear violation of Mexico‘s labour laws.

Mexico’s federal government aims to reform the country’s labour laws, making it easier for factories here to compete with China.

But one man told Al Jazeera that the company he worked for has simply stopped paying its workers.

“We are not receiving our paychecks on time. Days and weeks go by and we see nothing. We’re demanding our pay because we’ve been fired,” Matias Flores, a clothing factory worker, said.

Many workers also complained that safety conditions inside many of the factories were sliding.

Juan Cortez, clothing factory worker, said: “Before, we were given equipment to protect are lungs from the lint and dust in the factories. Now we get nothing and it’s a danger to our health.”

Meanwhile, Aleman, said changes had to come from the government.

“In a way, we are complying with the laws. The federal government is also obligated to improve things,” he told Al Jazeera.

Efforts are under way to create independent labour unions, but companies have so far tried to undermine them.

One labour organiser says companies are using competition from China as an excuse to abuse Mexican workers.

“Yes, there is a crisis in Mexican factories. But the owners still have the money to buy new vehicles each year, take vacations to Rome and go hunting in Africa. They accumulate wealth. Meanwhile, they cut workers’ salaries and health-care benefits,” Martin Barrios, an independent union organiser, said.

Despite the harsh labour conditions many Mexicans face, they await government action to help improve their working conditions. 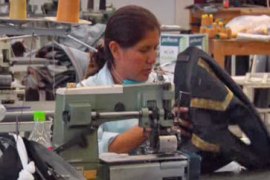 A place once famous for pure water faces textile-industry pollution.