Susan Brownell is Professor of Anthropology at the University of Missouri-St Louis. She is an expert on Chinese sports and Olympic Games, and is frequ... ently interviewed on these topics by international media. She was a nationally-ranked track and field athlete (heptathlon) in the U.S. before she joined the track team at Peking University and was selected to represent Beijing in the 1986 Chinese National College Games, where she set a national record. Training the Body for China: Sports in the Moral Order of the People's Republic (1995) is the first book on Chinese sports based on fieldwork in China by a Westerner. She spent one year in Beijing in the lead up to China’s first Olympic Games in 2008, when she was the only non-Chinese member of a team of academic experts working with the Beijing municipal government on its “Olympic education” programs in schools and universities. She also conducted research at the Olympics in Athens, Rio, and PyeongChang. She is the author of Beijing’s Games: What the Olympics Mean to China (2008), co-author of The Anthropology of Sport: Bodies, Borders, Biopolitics (2018), and has published multiple other works and online commentaries about China and sports. 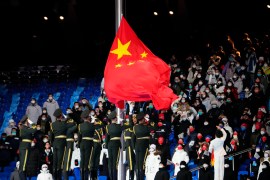