Roberto Valent is the Special Representative of the Administrator for UNDP's Programme of Assistance to the Palestinian People (UNDP/PAPP). Prior to h... is current position, Mr Valent was the UN Resident Coordinator and UNDP Resident Representative in El Salvador and Belize. From 2007–2010, Mr Valent was Deputy Special Representative at UNDP/PAPP. From 2005–2007 he was Deputy Country Director in the Democratic Republic of Congo, and before that he was assigned as Deputy Resident Representative in Sudan from 2002–2005. Mr Valent began his career with UNDP in 1995 in Albania. An Italian national, he holds a BA and an MA in political sciences from Bologna University, Italy, followed by another MA in international relations from Sussex University, United Kingdom.

Gaza’s econ­o­my has col­lapsed but its res­i­dents can­not do any­thing about it. 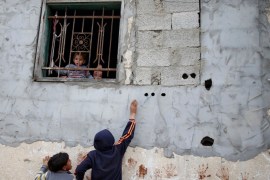