Richa Sanwal has previously worked with New Delhi Television (NDTV) in New Delhi and was a producer with Al Jazeera America in New York City. Her work... has been published on Mirchi, Newsweek, Yahoo! and ABC News. She holds a masters degree in journalism and documentary filmmaking from New York University.

We are try­ing to help those suf­fer­ing from COVID-19 in In­dia, but vol­un­teer work alone can­not get us out of this cri­sis. 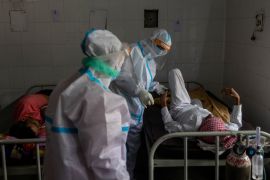