Razan Ghazzawi is a Syrian Palestinian scholar and activist. She was a protestor and a grassroots activist in the 2011 uprising. She was detained twic... e by the Syrian State and was forced to get smuggled out of the country under threats of a third detention. In 2013 Ghazzawi returned to Syria to live in Kafranbel, a town in the north of Syria which was not under the control of the regime. She is currently a first year PhD candidate at the University of Sussex. Her thesis focuses on the intersections of sexuality, exceptional violence and sovereignty of the Syrian state.

On Rojava’s new international LGBTQI brigade, the “war on terror” and the Western left’s erasure of local struggles. 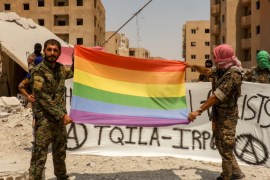