Philip Roessler is Associate Professor of Government at the College of William and Mary and in 2017-2018 Visiting Fellow of Practice at the Blavatnik ... School of Government, University of Oxford. He is author of Ethnic Politics and State Power in Africa: The Logic of the Coup-Civil War Trap (Cambridge University Press, 2016) and, with Harry Verhoeven,Why Comrades Go to War: Liberation Politics and the Outbreak of Africa’s Deadliest Conflict (Hurst Publishers, 2016).

How the African Union got it wrong on Zim­bab­we

By tac­it­ly sup­port­ing a de fac­to coup in Zim­bab­we, the AU has dam­aged the re­gion’s ef­forts to end pol­i­tics by force. 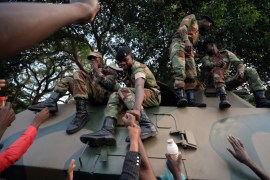