Natalie Fenton is a Professor of Media and Communications and Director of Research in the Department of Media, Communications and Cultural Studies at ... Goldsmiths, University of London. She is also Co-Director of the Centre for the Study of Global Media and Democracy. She has published widely on issues relating to civil society, radical politics, digital media, news and journalism and is particularly interested in issues of media reform and democracy. She was Vice-chair of the Board of Directors of the campaign group Hacked Off for 7 years and is Chair of the Media Reform Coalition. She recently led a research team working with civil society groups on a two year independent inquiry into Civil Society Futures. Her latest book is Digital, Political, Radical (2016, Polity). She has two forthcoming (2020) co-authored books, Media, Democracy and Social Change: Re-imagining Political Communications (Sage) with Des Freedman, Gholam Khiabany and Aeron Davis and The Media Manifesto (Polity) with Lina Dencik, Des Freedman and Justin Schlosberg. 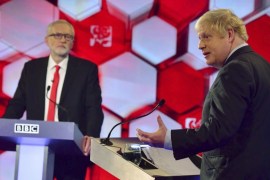 Traditional and social media in the UK amplified the Conservative Party’s messaging at the expense of Labour.