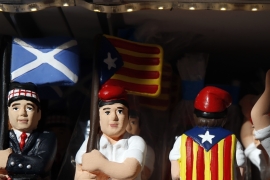 What happened to Catalonia can’t happen to Scotland

Negotiations and compromise have prevented a Catalonia-style crisis in Scotland.