Mark Craig is an independent director and producer. His most recent film is the critically-acclaimed, multi-award winning theatrical feature doc The L... ast Man on the Moon. His trilogy of British motor-racing biographies (Jackie Stewart / Graham Hill / Jim Clark) received an RTS nomination and a FOCAL award for best use of archive footage, while his 2007 short film Talk to Me won a Grierson Award for innovation.

Farewell to the last man to walk on the Moon

Be­fore his death, Gene Cer­nan threw down the chal­lenge to the next gen­er­a­tion to forge the des­tiny of to­mor­row. 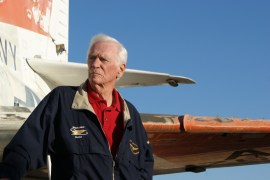