John Spacapan is the Wohlstetter Public Affairs Fellow at The Nonproliferation Policy Education Center. Previously, he was a researcher on Middle East... ern Studies at the American Enterprise Institute, working under Dr. Kenneth Pollack, Dr. Michael Rubin and Mr. J. Matthew McInnis. Prior to work at AEI, he served as a foreign policy Legislative Aide on the staff of U.S. Senator Mark Kirk. He holds a BA in Public Policy and Middle Eastern Affairs from Vanderbilt University, where he completed his capstone research paper, “ISIS: The Vanguard of Terror Recruitment in America”, and an MA from The Committee on International Relations at The University of Chicago, where he completed his thesis, “Democratic Consolidation as Collective Bargaining: The Jasmine Revolution and Tahrir Square.”

If Biden wants a last­ing agree­ment with Iran, he is go­ing to have to broad­en the ap­peal of the ne­go­ti­a­tions. 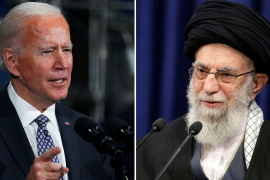