Professor John Doyle is Director of Dublin City University's Institute for International Conflict Resolution. He has published widely on Northern Ire... land. mostly recently with a significant focus on the impacts of Brexit on the peace process there. John is leading the University's contribution to cross-border collaboration on the island of Ireland, including Ireland North-South: a research programme on the Future of the island of Ireland, exploring the research which needs to be conducted and debated before a referendum on a United Ireland is held.

Will the N Ire­land elec­tion pave the way for a unit­ed Ire­land?

If it wins Thurs­day’s as­sem­bly elec­tion, Sinn Féin will be the strongest par­ty on both sides of the Irish bor­der. 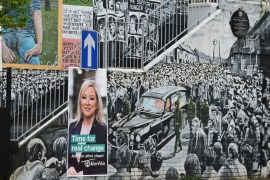