Dr Jeffrey A Stacey is a national security and development consultant residing in Washington, DC. He is a former State Department official and Senior ... Advisor to the Coordinator for Reconstruction and Stabilization, Senior Fellow at the Center for Transatlantic Relations, Professor of Political Science and International Relations at George Washington and Tulane Universities. His consulting clients have included the United Nations, the US Defense Department, the State Department, NATO, the World Bank, the Asian Development Bank, and the European Union as well as various think tanks, business firms, and foreign governments (most recently the UAE, Somalia, and Afghanistan). A specialist in international security, geoeconomics, and governance, he has spent equal parts of a near 20-year career in government, academia, and the private sector dealing with diplomacy, alliance building, mediation/facilitation, global initiatives, pre and post conflict stabilization, and economic / trade / investment strategies. He is a frequent keynote or guest speaker, blogger at Washington Note, Democracy Arsenal, and Duck of Minerva, and widely published in such publications as Foreign Affairs, Foreign Policy, US News and World Report, the National Interest, Der Speigel, the Washington Post, inter alia. Stacey is the author of "Integrating Europe" by Oxford University Press and is currently working on a book entitled "Rise of the East, End of the West?" He received his PhD from Columbia University, MPhil from Oxford University, and Honors BA from the University of Michigan.

Turkey and the Khashog­gi saga: How Er­do­gan played his cards right 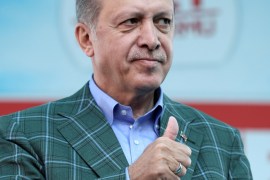