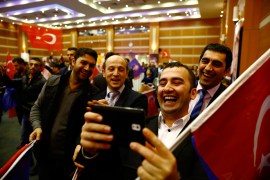 Istanbul, Turkey – Turkey’s Justice and Development Party (AK party) has swept a majority victory in a snap poll held on November 1, allowing it to lead the country alone after less than a half-year break. Turkey voted in parliamentary elections for a second time in five months on Sunday amid instability from neighbouring Syria […]