Professor David Canter is one the UK's most eminent applied social psychologists, being one of the few to be appointed as an Honorary Fellow of the Br... itish Psychological Society and having been elected as a Fellow of the Academy of Social Sciences and the American Psychological Association. Although he is internationally known for his development of the discipline of Investigative Psychology, bringing scientific precision to "offender profiling", he has worked as a management consultant to major blue-chip companies on risk reduction, amalgamations and briefing for new building complexes. He has also given advice to government enquiries on crowd control. He has published many books and hundreds of academic articles, having been awarded a UK Golden Dagger and the US Anthony award for his best-seller Criminal Shadows, and having written and presented a six-part documentary series, Mapping Murder, which is also published as a widely read book.   He is currently Director of the International Research centre of Investigative Psychology at the University of Huddersfield, UK and is Emeritus Professor at the University of Liverpool, UK.

If Stephen Pad­dock was not part of a net­work, but a ‘lone wolf’, can he still be clas­si­fied as a ter­ror­ist? 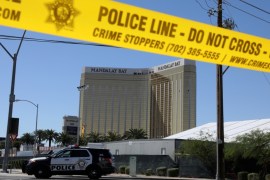