Ashoka Mukpo is a freelance writer and videographer who reports on culture and politics in West Africa. He is a former staff member at Human Rights W... atch and the Sustainable Development Institute, a Liberian advocacy organisation that investigates corruption and misconduct by extractive industry operators. In 2014, he contracted the Ebola virus while reporting in Liberia, surviving after being treated in the United States. His work has appeared in media outlets across the world. 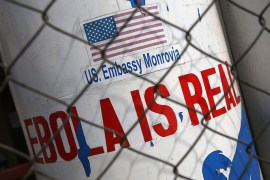