Ashley Andreou is from Vancouver, Canada and is a 2019 Yale School of Public Health (YSPH) MPH student. Before coming to YSPH, Ashley worked with the ... HIV, Health, and Development Group at the United Nations Development Programme (UNDP). At UNDP, she worked on policy reports that investigated the linkages between gender, sexuality, and the right to health. Most notably, she contributed to the United Nation Secretary-General's High-Level Panel on Access to Health Technologies Report, which explored how intellectual property law and trade agreements can be used to fulfill people’s right to health. Prior to working at the UN, Ashley earned her BA in Biochemistry from Occidental College and conducted research on international health issues, such as hypovitaminosis A in Latin America and the relationship between student absenteeism and air pollution in Hong Kong and China. Ashley is currently a senior Global Health Justice Fellow at the Yale Law School and her research focuses on access to cancer treatment in low- and middle-income countries. 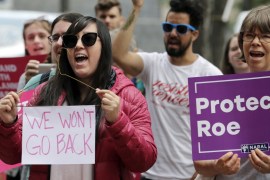 American women’s right to choose is in danger

A recent court ruling in Ohio signals that access to legal abortion for women in the US could be gradually restricted.