Adam Makary is an Egyptian-American filmmaker currently receiving his MFA in Film & TV Production at the University of Southern California. He started... his career as a print journalist in Egypt then moved on to work as a field producer for several major news outlets including Al Jazeera English, CNN, ABC and Channel 4 in the lead up to and the aftermath of the Arab Spring.

For Copts to feel safe in their coun­try, the Egypt­ian gov­ern­ment needs to ac­knowl­edge their need for pro­tec­tion. 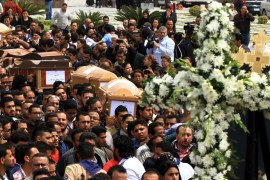